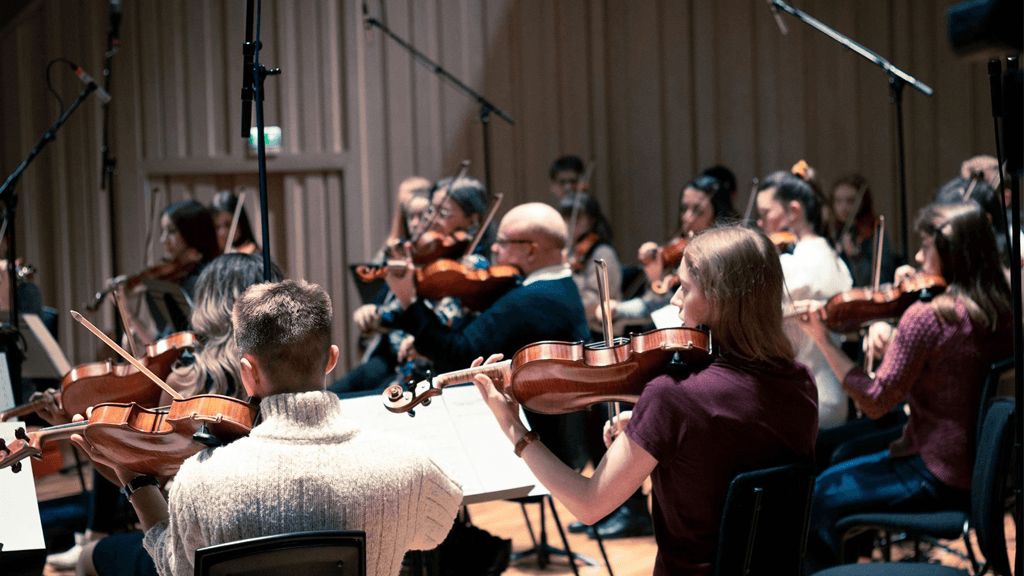 I discovered my passion for composing music when I was 14. Shortly after I started writing, I was able to hear the orchestra playing in my head. Since then, one of my dreams has been to have a real-life orchestra perform my work.

I've held onto this dream and kept it close to my heart throughout my life — through college, the start of my career, and my journey building my business.

It’s never been clear how achieving this dream would be possible...

That's when I discovered the Northern Film Orchestra.

Normally, it is very challenging for an independent composer to get a full orchestra together to perform. There are the obstacles of cost, minimum recording session times (usually around 3 hours) and other factors.

I learned about the NFO and got in touch with them toward the beginning of 2021. Their offering of shared recording sessions gave me a glimmer of hope that this could be the moment. A shared session is where multiple composers can split the time of a 3 hour session and share the cost.

I reached out and asked them to let me know when they had openings available for shared sessions. That email came in September for an opening in a November session and I immediately knew that this was my opportunity. It meant that I needed to move fast if I wanted to make this dream a reality.

I had 6 weeks to check off some pretty big items on my to-do list:

But since you're here, you probably already know that my dream was realized.

On November 15, 2021 I found myself sitting in The Stoller Hall in Manchester, England along with 60 members of the Northern Film Orchestra. Compositions I had written nearly two decades ago were printed out and placed on their music stands. Over the next hour and a half we would record Escape & Clear Sailing.

It was surreal, exhilarating, and sentimental — all at once.

So without further ado, I am incredibly proud to present you with a documentary I created that chronicles the entire experience — from start to finish.

Bringing the Music to Life

Now that you've seen the finished product from my journey, let's take a look at the incredible group of talented musicians that made this all possible.

The Northern Film Orchestra is a dynamic group of musicians. One thing that absolutely amazes me about these studio musicians is that the day of the recording session is the first time any of them are seeing or hearing the music they’ll perform. This means they are sight-reading the music on the day of the performance. The recordings you just heard in the documentary were the result of 45 minutes of rehearsing and recording from the time they first saw the music until the last note was played.

Another critical contributor to the final recorded product is the sound engineer who is responsible for positioning all of the microphones on the stage to create the best possible “sonic picture” of the music being played. I don’t know much about this field, but I can recognize there’s a blend of art and science involved in getting it right.

In this photo below, you can see me standing with all of the people who contributed their time, energy, and gifts to bringing my pieces to life. Included are the 57-piece orchestra, 9-voice choir, the conductor Melvin Tay, the orchestra manager Jack Hughes, and the score reader Nicolò Braghiroli. Plus, you can get a sense of just how many microphones were used to record the session (over 30).

Here’s the breakdown of the ensemble we had for these two pieces:

But before these incredible musicians could perform my pieces, there had to be music to play.

Here’s what I mean…

From Mockups to Finished Scores

Remember earlier, when I said I needed to have my compositions orchestrated before they could be performed by the orchestra?

I compose my music in a digital audio workstation (DAW) where I create separate tracks for all the instruments I want to use in the piece and then play in the notes I want for each instrument (this live scoring video demonstrates my process).

When I composed Escape and Clear Sailing I was using a DAW called Cakewalk and all the sounds for my mockup were generated by a Roland XP-80 synthesizer. You can listen to my original synth mockups here: Escape | Clear Sailing (notice how different they sound from a live orchestra?!)

Even though I have an orchestra in mind when I’m composing there are very specific considerations that need attention when preparing the music to be performed by an actual orchestra. It’s the job of an orchestrator to produce the score that will be set in front of the musicians. I don’t know a lot about what the orchestrator’s job is, but I recognize it’s a deep, compelling, and creative area of study. Here are a couple of videos found illuminating of a professional orchestrator explaining what they do and what they don’t do.

Susie Benchasil Seiter was the orchestrator I worked with on these compositions. Even in 2010 Susie had a well-established career as an orchestrator and conductor working in Hollywood. I’m grateful to her for working with me and I could not have asked for a better person to help guide me through the experience.

Up until this point, music composition had been a solitary exercise for me. Now, all of a sudden, someone else was seeing the inner-workings of my music and collaborating with me. Susie was patient and encouraging which meant a lot to me as I was feeling a bit self-conscious and vulnerable during this process.

If you’re interested, you can take a peek at the finished scores here:

Reviewing The Scores Over Tea & Biscuits

Once the orchestrations were complete, I was ready to review the scores with the conductor and orchestra manager to ensure smooth sailing on the day of the session. In fact, this is one of the first things I did after arriving in Manchester.

When the conductor Melvin and the orchestra manager Jack swung by my AirBnb, I offered them some tea, “biscuits” — as the Brits say — and fruit.

We immediately dove into the intricacies of the two scores before the official performance and recording session scheduled for the following week. It was quite the experience. To be able to sit down with the people who'll help bring my music to life felt amazing.

Here's a few highlights from our convo:

After we went over all these details, the conductor asked me a question:

"What are you going to use this recording for?"

"I don’t have a specific plan. It's just fulfilling a lifelong dream."

When I started composing music at 14, I used to imagine a live orchestra performing my compositions. It's been a long journey getting to this point.

I composed both of these pieces back in 2002, had them orchestrated in 2010 and stashed the scores away in a box for 10+ years. (the original pages even turned yellow!)

But I never let the image of an orchestra playing my pieces leave my imagination.

I’m excited to announce that we’ve started work on another recording session scheduled for the Summer of 2022. For this, I’ve selected 9 compositions each of which have a special significance to me and in total we’ll be recording over 30 minutes of music.

I’ll be posting behind-the-scenes videos on my Patreon during each stage of the process. It means a lot to me to have a community to share and collaborate with so if you’re interested in following along and supporting me, check out my Patreon. I hope to see you there!